light flicker and your health – most artificial sources of light have flicker!

Flicker is common characteristic of most artificial (man-made) light sources, and another way that artificial light is different than natural light (which has no flicker). Flicker is due to the way light sources are powered and depends upon the type of ‘lamp’ as well as the electronics used to drive the light-source. The electricity which comes out of a regular wall socket alternates at 50 or 60 Hz (AC = alternating current) which means the power feeding most lights is cycling on/off 100 or 120 times a second. As a result, many light sources flicker at 100 or 120 Hz, since they have power twice in every cycle. Almost all artificial light sources are associated with flicker, including TV screens and computer monitors. Flicker is a known cause of headaches and eye strain and has also been tied to reduced concentration and visual performance. Studies show that some individuals are more sensitive to flicker than others. In addition to headaches and eye-strain, flicker can increase heart rate, induce dizziness or nausea and even trigger seizures. Unfortunately, the commonly used flicker metrics don’t provide enough information to judge the quality of a light source. Here we describe the health impacts of flicker, provide measurements of common light sources (incandescent, LED, fluorescent), and discuss what makes some artificial light sources more disruptive than others. 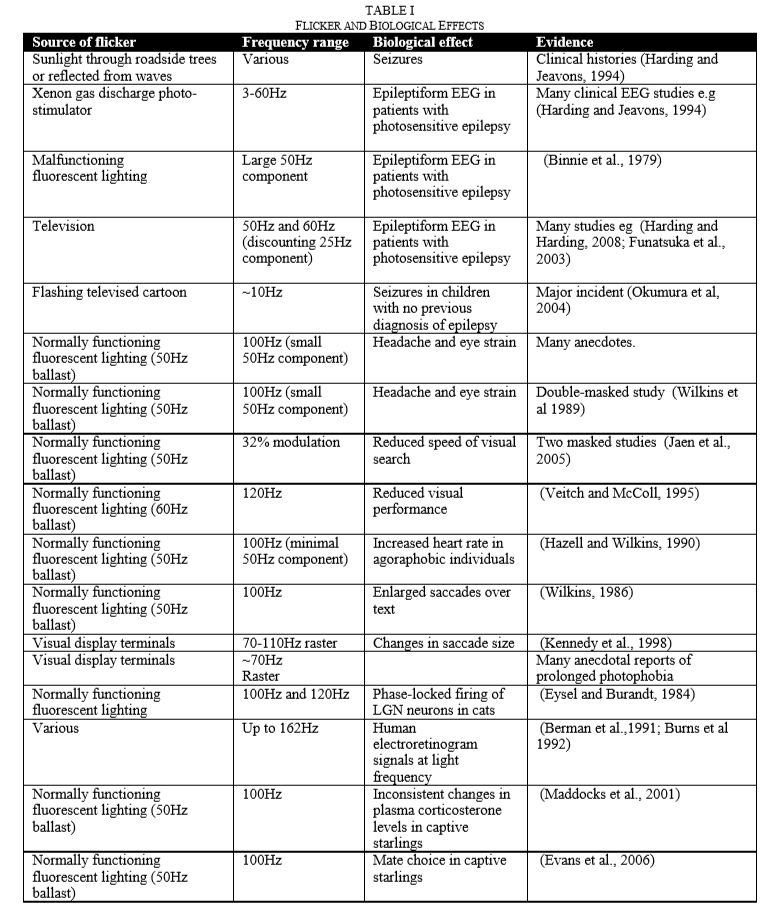 Flicker refers to the change in the intensity of the light source as a function of time. In simple terms, the two things which matter are (1) how much the light intensity varies (flicker amplitude) and (2) how many times per second the light is flashing or cycling (flicker frequency). The two most common flicker metrics (flicker percent and flicker index) are a measure of (1) how much the intensity of the light varies. As you would expect the higher the number, the more the intensity or amplitude of the light varies (the worse the flicker). Old fashioned incandescent bulbs flicker at 100-120 Hz but with less than a ~10% variation in intensity/amplitude which is generally not enough to cause discomfort. Equally important is (2) the rate at which the light varies (how many flashes per second). As it turns out the slower the light cycles or flashes the more disruptive the flicker! First generation fluorescents (with magnetic ballasts) flickered at 100-120 Hz, leading to complaints of headaches and eyestrain. Newer fluorescents (with electronic ballasts) cycle at 20-60 kHz (>100x faster) which is thought to be outside the range of human perception – but most still have some 120 Hz oscillation. Poorly designed LED lights flicker at 100-120 Hz and can be quite disruptive, while higher quality LED lights flicker at lower amplitude and much higher frequencies. In an extreme case of disruptive flicker, a 1997 Pokémon cartoon showed flashes at 10 Hz (10 cycles/second) causing seizures in children with no prior history of epilepsy. Humans can see lights flicker up to 60-100 Hz (60-100 cycles per second) which is called the critical fusion frequency, but negative health effects have been documented at frequencies up to 200 Hz and there is speculation of impacts at even higher frequencies. Net-net the lower the flicker percent (or flicker index) and the higher the flicker frequency, the l