Orange is the new golden in California, with thick smoke blanketing much of the state.  Our hearts go out to those who have lost their homes (or worse), and to the firefighters on the front lines.  The rest of us are dealing with unhealthy air and a surreal orange sky.  Regulators are warning against outdoor activities, schools are closing … the world around us looks like Los Angeles in the dystopian film Blade Runner.  We’re getting a taste of every-day life for people living in Delhi or Beijing, and what life in a fire-prone California may be like in the future.  The photos below illustrate how the smoke particles scatter light, obscuring our views and effectively filtering out blue light, which explains why the sky is orange. 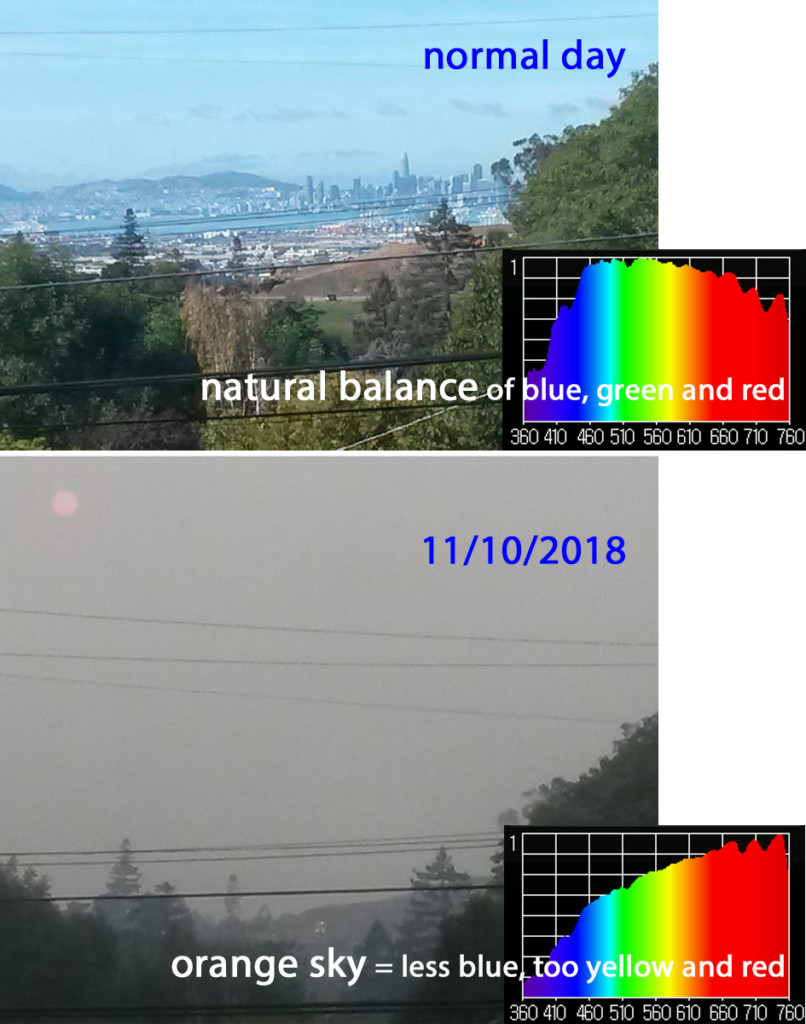 The orange sky of the smoke-filled California is due to scattering of light, basically the same mechanism which makes the sun appear reddish at sunset.  Sunsets and the blue sky are explained by a phenomenon called Raleigh scattering, where particles in the atmosphere preferentially scatter the blue light of the sun.  At noon on a normal day, sunlight has an even balance of blue, green and red light.  At sunset the light from the sun has to travel through more of the atmosphere, since the sun is at an angle to the horizon instead of directly overhead.  The additional atmosphere, as well as human caused pollution, effectively filter more of the blue light of the sun, leaving us with the yellow/red glow of sunset.   When our skies our filled with smoke particles we get appreciably more Raleigh and Mie scattering which preferentially filters blue light.  As these images show, we are left with too much yellow and red light, which explains the orange glow. 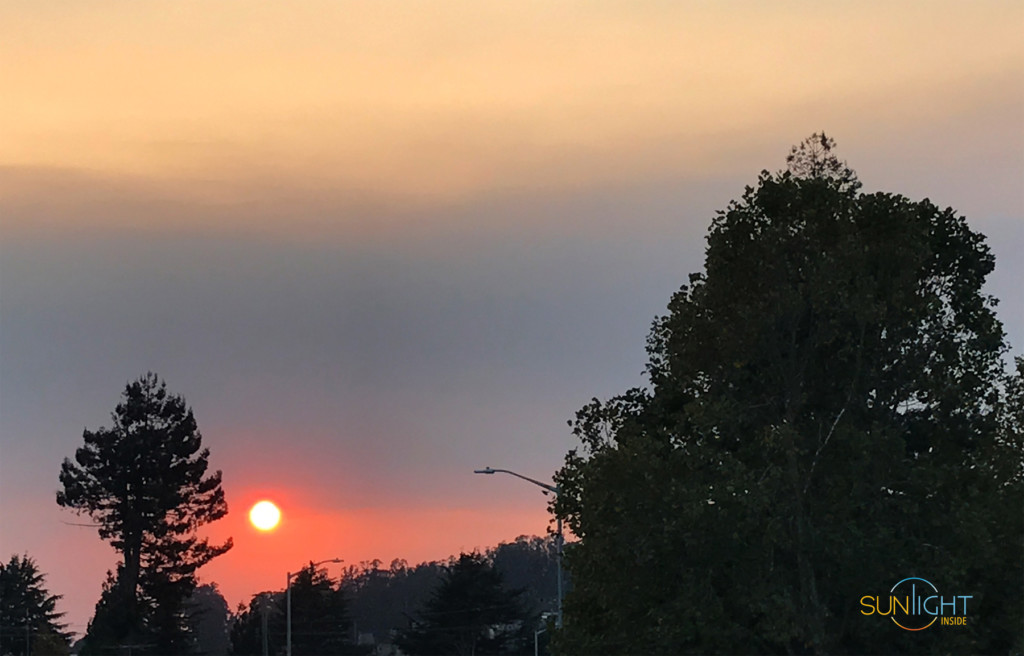 Orange light during the day is unhealthy and unnatural.  Our bodies expect bright blue-rich light during the day, this is what triggers our awake and alert signal.  We have a third photoreceptor in our eyes which effectively measures the time of day by measuring the intensity of blue light in our environment (click here for more on this).   Clearly poor air quality is a much bigger issue than a couple days of orange daylight.  The biggest negative impact from a light and circadian rhythm perspective is not the orange light, but is a result of more time spent indoors, without the strong light/dark cycle that we depend on to regulate our body clock.  Our wellness depends upon both healthy air to breathe, and regular exposure to a strong light/dark cycle.  After a week without much outdoor time or exercise, we’re all feeling the indoor-winter blues!? 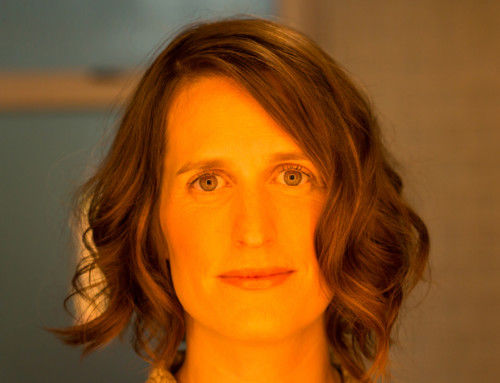 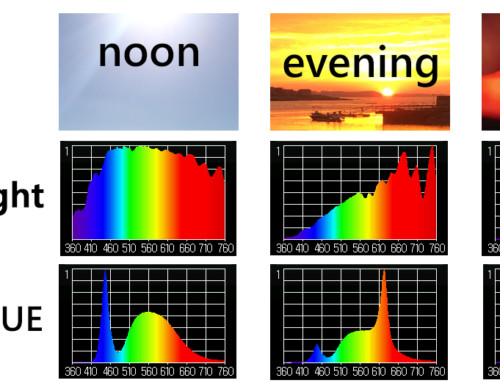 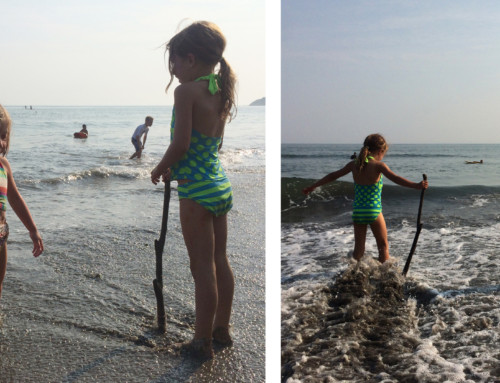 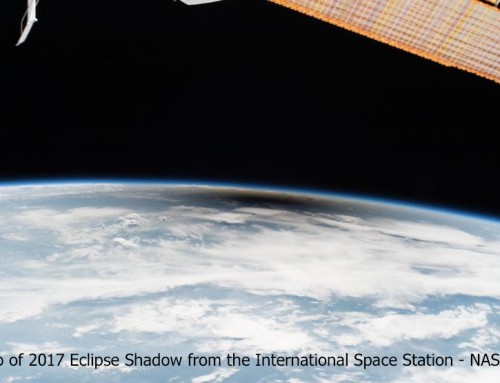 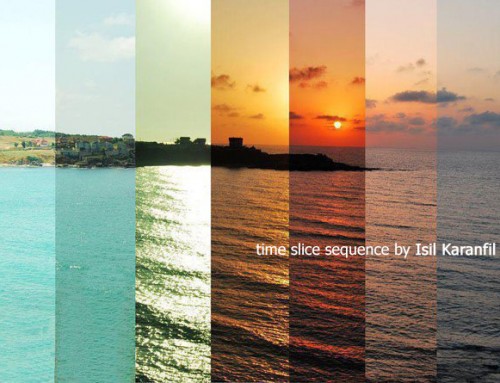 June 12th, 2017
Toggle Sliding Bar Area
Update: We are here, we are shipping = bring extra natural light into your home during these difficult times.
Page load link
Go to Top